Coppell High School students are known for being a generous group, with multiple fundraisers, charities and cultural events occurring throughout the year.

While these CHS students are making a tremendous impact locally, one student took her charitable actions a step further this summer.

When senior Surabi Rao heard she would be visiting India over the summer, she decided to seize the opportunity to give back.

Rao is the president of the Dallas chapter of the Akshaya Patra Foundation, a nonprofit organization established in 2000 that 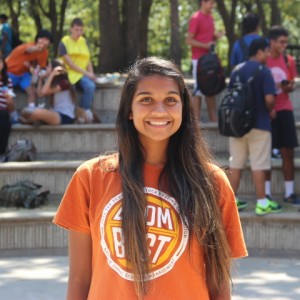 SENIOR SURABI RAO SPENT HER SUMMER IN INDIA WITH THE ORGANIZATION AKSHAYA PATRA THAT IS FOUNDED FOR THE PURPOSE OF FEEDING UNDERPRIVILEGED CHILDREN ALL OVER INDIA. PHOTO BY ALEX DALTON.

runs school lunch programs across India. Their mission statement is, “No child in India shall be deprived of education due to hunger.”

“Recently, we held a college panel that raised over $500 for schoolchildren,” Akshaya Patra Foundation member and senior Ajay Prabhu said.

The Dallas chapter of Akshaya Patra is always finding ways to give back to schoolchildren, even if that means going to them directly.

“I’ve wanted to visit a school that Akshaya Patra had helped feed for years,” Rao said. “When my mom told me that we would be going to India, I contacted Akshaya Patra and they set me up with a tour of a kitchen in Bangalore and a government (public) school that gets meals from Akshaya Patra.”

Though the experience of giving back is always rewarding, that does not mean that there is no hard work involved.

“First, I visited an Akshaya Patra kitchen in Bangalore,” Rao said. “The kitchen was a huge facility with several floors, and gallons of curries and hundreds of pieces of bread were produced every hour. Then, my mom, sister, and I went to a government school in Bangalore that had first graders through 10th graders. My sister and I talked to the children about what they wanted to be when they grew up, what their favorite classes were, who their favorite actors were, and more.”

Rao’s trip brings a sense of unity in a way that it shows how even across the globe, students are talking about the same things as in United States classrooms.

“It is incredible that these students are so similar to us,” senior Manali Gore said. “Her stories from India are really amazing.”

Unfortunately, Rao’s trip also reminds us of where there is not as much unity – in our quality of life.

“Afterwards, I talked to the teachers and the principal of the school,” Rao said. “They told me about how difficult it could be to teach all these children without proper funding. A teacher told me that every month, every teacher in the school donated a portion of their salary to buy

SENIOR SURABI RAO SPENT HER SUMMER IN INDIA WITH THE ORGANIZATION AKSHAYA PATRA THAT IS FOUNDED FOR THE PURPOSE OF FEEDING UNDERPRIVILEGED CHILDREN ALL OVER INDIA. PHOTO COURTESY OF SURABI RAO.

The hard work did pay off though, as Rao explained.

“The most rewarding part of my trip was actually seeing the faces of kids that I am helping through my nonprofit work,” Rao said. “When you live in Texas and you’re volunteering to help children in India, it’s really hard to lose sight of what you’re working towards. Meeting the children certainly helped me strengthen my purpose.”

Rao’s trip to India is truly what the foundation is all about.

“I joined Akshaya Patra because I wanted to bring luxuries to those kids in India who do not have them,” Prabhu said.

This gesture of kindness shows how easy it is to have a deeper connection with cultures that are different than our own and how similar we really are.

“I remember when I was leaving the school, one of the girls grabbed my hand and said, ‘Please promise me that you’ll never forget us,’” Rao said.

How You Can Help